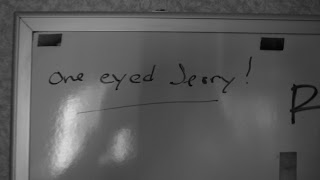 Sometimes when people have a baby they hire a doula. This is a person that helps to “quarterback” your birth. She protects you from the mystery curve balls that doctors and their hospitals throw at you. When our doula Tracy met us for the first time she wanted to know what our safe word would be when ordering an epidural. The word that you say when you REALLY want one instead of just saying so cause you’re having a particularly hard contraction. Our safe word is “One Eyed Jerry”.
Last night we hit the sheets about about 11pm. Our wake up time was scheduled for 3am to remove our little buddy Cervadil and start on the Pitocin potion. At around 12am midnight we learned what a real contraction felt like. Your mother is one of the toughest ladies I’ve ever known Pony, and these suckers had her buckling in half. We fought them until about 4:30am when we both agreed it was time to get some help. ONE EYED JERRY! ONE EYED JERRY! we both told our nurse Amy, who treated us like we were her brother and sister all night. So kind and wise.
After Arrow received our epidural from Dr. Blasko, both us us were able to sleep until about 6:45am. Man did that feel good Pony.
Now we’re waiting for your Mom’s cervix to open further so we can show you how to get out. We’re at 2cm and over 90% effacement. Which is promising for having the kind of birth we hope to have.
A few more photos. Your mother said it was okay to post these cause they tell a very detailed story. 🙂
Photo 1: thats in the AM yo, California time
Photo 2: thats your Momma, just before we asked for help
Photo 3: photo of the dry erase board in our room. Make no mistake about this, ONE EYED JERRY!
Love, Daddy

2 thoughts on “One Eyed Jerry!”

Lessons From the End of a Marriage

Rather than trying to "get over it," perhaps we can learn from it

I got sober. Life got big.

sacpros.org is devoted to breaking down the barriers which prevent access to mental health services by providing easy access to available services in the community

WITHIN ARE PIECES OF ME

A space of free expression

this is... The Neighborhood

the Story within the Story

Create the Life you always wanted

queanspeak
Coparenting Reality
The Beautiful In Between

"Don't forget about the blue sky, sunrise, & all the space between."

Confessions of a Terrible Dater

Why Isn't Dating Easier in the Digital Age?

Health, Fitness, and the Great Outdoors

Prose, Poetry and the Mindful Ramblings of a Socially Conscious Woman

Seven Tools for Unleashing Your Creative Self and Transforming Your Life

Tales from the mouth of a wolf